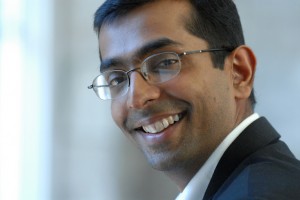 
Shantenu is an Associate Professor of Computer Engineering at Rutgers University and the Chair of the Department (Center) for Data Driven Discovery at Brookhaven National Laboratory. He was appointed a Rutgers Chancellor’s Scholar in 2015. He has held visiting positions at the University of Edinburgh and UCL.

Shantenu’s research interests are at the intersection of high-performance distributed computing and computational & data-driven science. He is the PI of RADICAL Lab and the lead investigator of RADICAL-Cybertools project which are a suite of middleware building blocks used to support large-scale science and engineering applications. He is proud to play a part in the upcoming revolution at the interface of computing and health-science — global health and “personalized” medicine. He collaborates extensively with scientists from multiple domains – including but not limited to Molecular Sciences, Earth Sciences and High-Energy Physics.

Shantenu was the recipient of the inaugural Chancellor’s Excellence in Research (2016) for his cyberinfrastructure contributions to computational science. He was also awarded a Rutgers Board of Trustees Fellowship for Scholarly Excellence (2014). He is a recipient of the NSF CAREER Award (2013) and several best paper prizes at SC’xy and ISC’xy. His current research has been funded by multiple NSF awards and US Department of Energy (DoE); his work has also been funded by US National Institute for Health (NIH), and the UK EPSRC.

Jha seeks fearless and revolutionary young minds to join the RADICAL (thinking) group! Away from work, he tries middle-distance running and biking, tends to be an economics-junky, enjoys reading and writing random musings and tries to use his copious amounts of free time with a conscience.